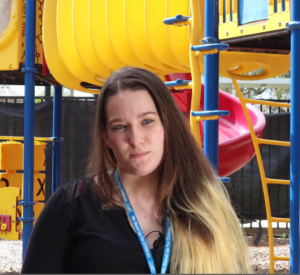 For more than two decades, Champions has provided parenting classes, a unique supervised visitation program, and other family support services to moms who are in treatment for substance use disorders at DACCO Behavioral Health. Many of these moms had traumatic childhoods themselves – but they love their children, and realizing they can give them a happy, healthy childhood is an empowering experience that provides strength and motivation throughout their recovery and parenting journey. Kassandra is one of these moms.

Kassandra is a 23-year-old mother of an 8 months old boy. Following the traumatic loss of her own mother-figure, Kassandra began a painful battle with substance use and felt there was no way out. When she became pregnant, she tried to stop using, but it wasn’t easy, and her son Jackson was born with drugs in his system. When Jackson was just three days old, DCF came to the hospital to remove him from Kassandra’s custody. Kassandra checked herself into DACCO for substance use recovery and quickly enrolled in multiple Champions services offered on-site: parenting classes, seminars, and facilitated visitations with her son. In just 3 months, she had shown so much progress that Jackson was allowed to come live with her in a private residence.

There is more to Kassandra’s story. To hear the rest, watch the video below.